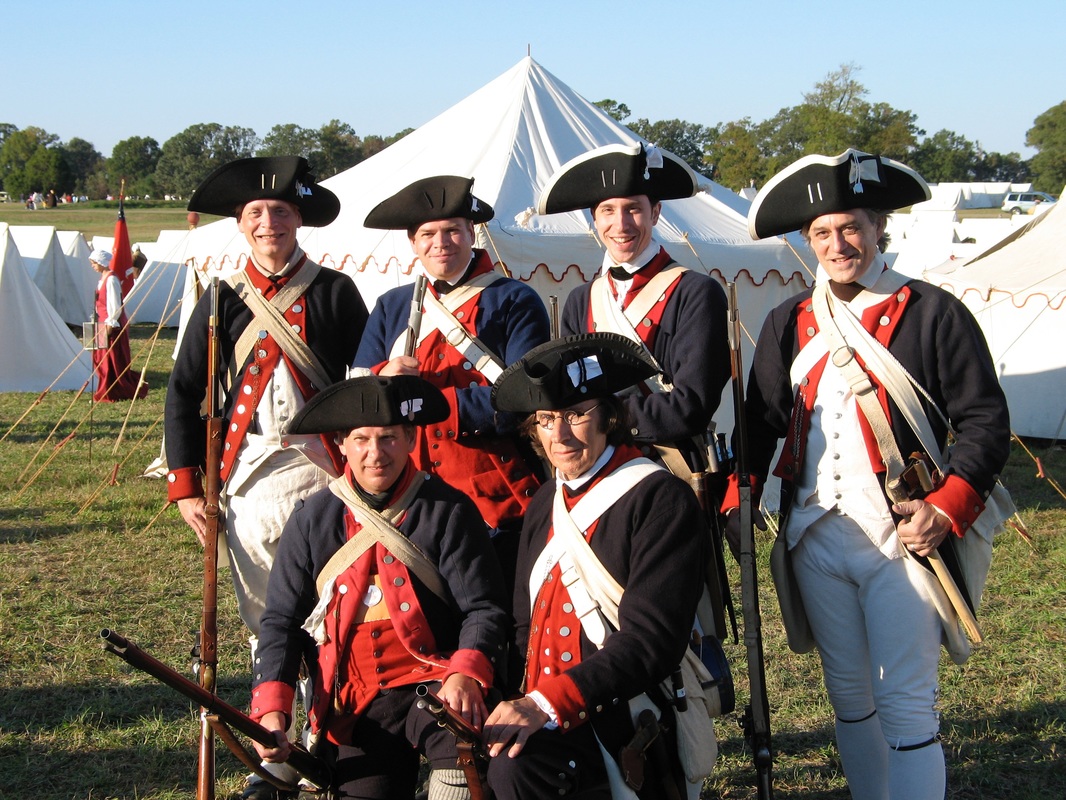 The 10th Virginia of History
1776-1782
Oct 12, 1776 -  Authorized by Congress as the 14th Virginia, commanded by Col. Charles Lewis.
Winter 1776-1777 - Recruited at large in central Virginia (between Tidewater and the Blue Ridge Mountains)
April-May 1777 - Marched to join the Main Continental Army via Baltimore;
received their arms, and became one of the first military units to participate in a vaccination program against smallpox.
June 1777 - Joined the Main Army under Washington, assigned to Weedon’s Bgd.
July-Sept 1777 - Philadelphia campaign
Sept 11,1777 Battle of Brandywine,  with Green’s Division, participated in the rearguard action that saved the Main Army from destruction.
Oct. 4, 1777  Battle of Germantown.  Issued 1st  uniform just before
Nov 1777-May 1778 -  Winter Quarters at Valley Forge.  A new commander, William Davies was appointed in March.
June 28, 1778 - Battle of Monmouth
September 1778 -  Name changed to 10th Virginia & assigned to Muhlenberg’s  Brigade; issued new French uniforms (lottery coats).
Nov 1778 to May 1779, Winter Quarters at Middlebrook NJ.  Reduced to 4 companies, combined with the 1st Virginia to form a single battalion.
July 15, 1779 - a detachment assigned to the Light Infantry Corps is in the vanguard of the assault on Stony Point.
Aug 1779, a 2nd detachment (lead by Capt. Reid) at Paulus Hook.
Nov-Dec 1779 - Winter Quarters at Morristown, NJ.
Jan-April 1780 - Marches south to Charleston SC. which is under siege.
May 1779 - the city falls to British forces, the Virginia line is captured, including 209 officers and men of the 10th Virginia.
William Davies was an early protégé of the Baron Von Steubon, and served as a sub inspector general of the Continental Army.  In his capacity as IG the Baron describes the 10th as having : arms and accouterments in good order, clothing as “very bad”, and in  the “best order and discipline possible.”

The Recreated Regiment
1978 to Present
The Tenth Virginia is dedicated to the authentic portrayal of the citizen soldier and camp followers of the Continental Army during the American War of Independence.  Founded as a muzzle-loader club in Ohio, the unit started with local parades, and then expanded into living history encampments and reenactments during the Nation’s  Bicentennial, including the 200th anniversary of the siege of Yorktown,  the largest event of its kind ever held.  The 10th receives invitations to most of the events held in North America, and is a chapter of the Continental Line, BAR, & NWTA.  Events are a mix of local events, as well as in the eastern US, Canada, and as far afield as England.  Our membership’s geographic center is SE Michigan and Mid Ohio.